Bicycles used to be a main source of transportation, especially in Shaolin. It was not uncommon to see a family of three (and occasionally four) on one bicycle. Now, due to an increased economy, motor scooters are popular. Now it is not uncommon to see a family of three or four on one motor scooter. The husband drives, the wife sits behind him holding a baby or small child, and another small child stands on the floorboard of the motor scooter, holding onto the handlebars. The other day, I saw a family of five on one small motorcycle. I'm not sure I can figure out how they did it, but there were five heads on that bike. More and more motorcycles are being sold, and more and more Volkswagen cars (and their Chinese mimics, made with parts from Volkswagen) are on the roads. I even saw a big Mercedes the other day in Zengzhou, which is a major city. And from what I understand, there is a Ferrari dealership in Beijing, but I've never seen one on the road. The roads are another story.... 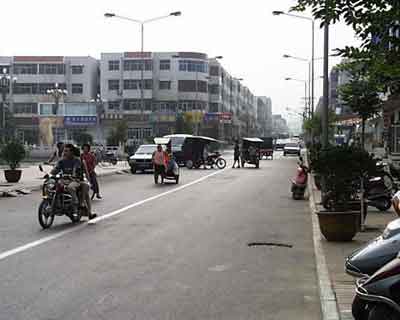 Taxi cabs are a trip here, kind of reminiscent of the tuk tuks of Bangkok. They're just not as fast. These things really struggle when two people get in the back, especially if one is a large American. A few taxi drivers refused to take Yong and I back to Shaolin when they caught sight of me. They're basically a small motorcycle with an even smaller engine, mounted to a two wheeled canvas covered cart. They don't move very fast, and it's quite exciting when a Volkswagen zooms by, just skimming the taxi as close as it can get. Especially when the car is coming from the opposite direction. What I find humorous about these things, is that the taxi drivers, for the most part, wear these shitty plastic construction type helmets, all as if it were some sort of regulation. As if it were really going to make a difference. 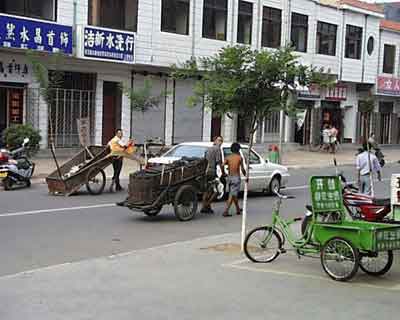 Despite the fact that many people are upgrading to motorcycles and motor scooters, many workers still rely upon the old standby. Human power. Hand drawn carts are common, even in the largest cities. Beijing included. 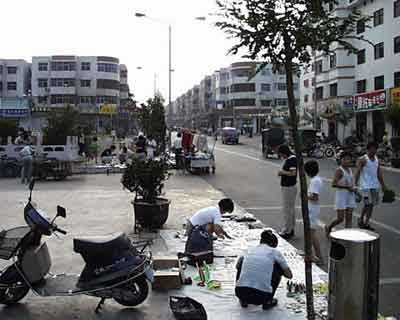 Nighttime starts to fall in DengFeng. And with nighttime, comes people. Lots of them. From apparently nowhere come multitudes of people, all kind of dressed up (at least better than me), to set up their wares on the sidewalk, to eat dinner at the outdoor eateries, or just to hang out in the square and play all sorts of exciting games. Like, roll the old bicycle tire so that it falls and lands around a vase which is sitting on the ground (which you then get to keep). Or, throw a small straw ring around a vase that's sitting on the ground (which you then get to keep). Or, get the small straw ring around a toy truck. And you get to keep that too. People would bring boxes of these vases, cups, trucks, etc, put them on the ground in the main square, and put a chalk line down, behind which you have to stand. You pay a Yuan for each bicycle tire or straw ring that you get to throw. And many people watch this. People cheer the woman on who's already captured her third vase. They cheer as she grabs with apparent disgust, the few remaining rings her husband has, as he's missed every damn one.  It's the main form of entertainment in DengFeng. That, and congregating in mass groups, all sitting on the sidewalk and even the street, to watch some fortunate being's television and VCD player. 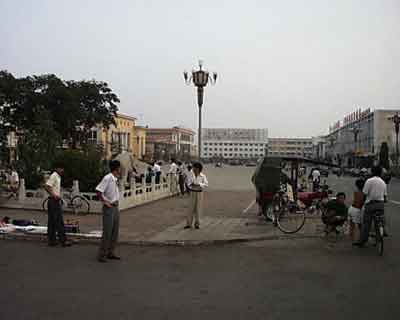 The main square. Here is where all the exciting games are played. The large tan building to the left in the picture is the town auditorium, where they occasionally have different types of Chinese concerts, and rarely, show movies. People come here at night to just congregate and hang out. Every night.