Bedbugs have feasted on sleeping humans for thousands of years. After World War II, they were eradicated from most developed nations with the use of DDT. This pesticide has since been banned because it's so toxic to the environment.But if you're thinking of going to Shaolin, or anywhere in China in general, you're more than likely going to become intimate with these little critters. Here's some information that you might find helpful.

Spurred perhaps by increases in international travel, bedbugs are becoming a problem once again. Bed bugs are common in eastern European and third world countries, especially in areas of extreme poverty. The blood-sucking parasites had nearly disappeared in developed countries until recently; in the last 5 to 10 years, they have been making a rapid comeback. The parasites have recently been reported as increasingly common inside US hotel rooms.The risk of encountering bedbugs increases if you spend time in places with high turnovers of night-time guests — such as hotels, hospitals or homeless shelters. Human infestation with bedbugs, lice, and mites are common causes of dermatologic symptoms. Although these organisms thrive in conditions of overcrowding and decreased sanitation, Americans of all socioeconomic backgrounds may be at risk for infestation. Clinicians must maintain high suspicion in the appropriate set of clinical circumstances to identify and treat infestations, as they can cause substantial dermatologic and psychological discomfort for patients. 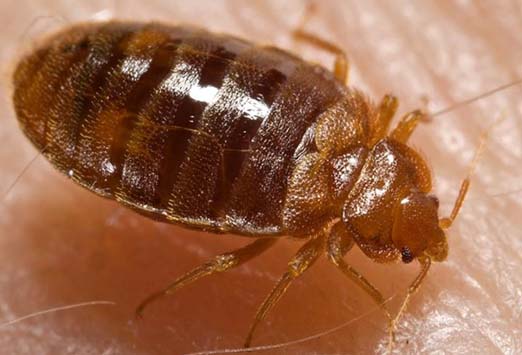 Bedbugs are parasitic arthropods from the family Cimicidae. The common bed bug, Cimex lectularius, has been an associate of humans for thousands of years. The word Cimex is derived from the Roman designation for bug, and lectularius from the Latin name for couch or bed. Bedbugs are reddish brown, oval and flat, about the size of an apple seed. During the day, they hide in the cracks and crevices of beds, box springs, headboards and bed frames.  Bed bugs are cosmopolitan in distribution, found in temperate re gions worldwide. Another bed bug species, Cimex hemipterus, is also wide spread but is found mostly in the tropics. Several other bed bug species are found on bats, but they do not bite people. Adult bed bugs are approximately 5 mm long, oval, and flattened. They somewhat resemble unfed ticks or small cockroaches. Adults are reddish brown (chestnut), immature bugs resemble adults but may be yellowish white. Bed bugs have a pyramid-shaped head with prominent compound eyes, slender antennae, and a long proboscis tucked backward underneath the head and thorax. The prothorax (dorsal side, first thoracic segment) bears rounded, winglike lateral horns on each side. They are typically less than 1 cm in length and reddish brown in color. Bedbugs can be found in furniture, floorboards, peeling paint, or other small spaces, most commonly in areas of clutter.  They also can be found under peeling paint and loose wallpaper, under carpeting near baseboards, in upholstered furniture seams, and under light switch plates or electrical outlets. The luggage that you keep on the floor is a prime place for them to hide. Don't be surprised if they get into your luggage and travel to other countries.

They come out at night in search of prey upon which to feed, with peak feeding times just before dawn. Bedbugs are typically attracted to body heat, carbon dioxide, vibration, sweat, and odor. Bed bugs feed at night, hiding in crevices during the day. Hiding places include seams in mattresses, crevices in box springs, and spaces under baseboards or loose wallpaper. There are 5 nymphal stages that must be passed before development to adulthood. Once an adult, the bed bug has a life span of 6 to 12 months. At each nymphal stage, the bed bug must take a blood meal  in order to complete development and molt to the next stage. The bugs take about 5 to 10 minutes to ingest a full blood meal. Bed bugs can survive long periods without feeding, and when their preferred human hosts are absent they may take a blood meal from any warm-blooded animal.

Bed bugs possess stink glands and emit an odor. Homes and hotel rooms heavily infested with the bugs have a distinct odor. 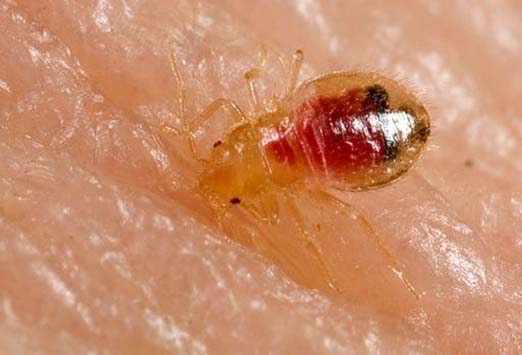 After bedbugs find a food source, they bite down with their mouths and inject anticoagulant and anesthetic compounds into the skin. Depending on the species, they feed on the host blood via one of two mechanisms. Vessel feeders directly insert their mouthparts into superficial capillaries, while pool feeders damage the superficial tissue and feed on the accumulated blood. As bedbugs feed, their color may change as they swell with the host blood.

Bed bugs have piercing/sucking mouthparts typical of the insect order Hemiptera. Bedbug bites themselves are typically painless. However, the subsequent allergic reaction that may develop can cause intense pruritus. It can be difficult to distinguish bedbug bites from other insect bites. In general, the sites of bedbug bites usually are:

* Red, often with a darker red spot in the middle
* Itchy
* Arranged in a rough line or in a cluster
* Located on the face, neck, arms and hands

Some people have no reaction at all to bedbug bites, while others experience an allergic reaction that can include severe itching, blisters or hives. While feeding, bedbugs may inject one of several pharmacologically active substances, including hyaluronidase, proteases, and kinins. These compounds may induce different skin reactions, such as erythema, wheals, vesicles, or hemorrhagic nodules. Repeated bites may sensitize individuals, leading to more pronounced cutaneous manifestations or systemic hypersensitivity reactions. The local trauma from bedbug bites can lead to secondary bacterial infection, causing ecthyma, cellulitis, or lymphangitis. There is some evidence that bedbugs may also be a vector for hepatitis B and Chagas disease. Histologic findings from bite-site biopsy specimens typically show eosinophilic infiltrates, which are indicative of the allergic nature of the reaction.

The resurgence of bedbugs in developed countries may be linked to increased international travel, legal and illegal immigration, changes in pest control practices, and insecticide resistance. Bedbugs are more common in crowded lodgings that experience high turnover in occupancy, such as apartment complexes, dormitories, homeless shelters, hotels of all types and costs, military barracks and refugee camps. If you're going to Shaolin, expect them, regardless of where you stay. That goes for anywhere in China for that matter; and as the Chinese become more mobile and travel around other countries in Asia, bedbugs have become more common in hotels of those countries. 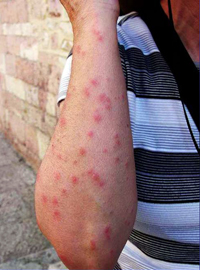 Bedbugs don't usually stay on their human hosts after their meal, but they might take refuge in clothes or luggage left nearby on the floor. If you're traveling and bedbugs get into your luggage, you might bring them home with you. All they need is a warm host and plenty of hiding places. Even pristine homes and hotels can harbor bedbugs. And while bedbugs may hitchhike on your belongings, they also can crawl about as fast as a ladybug. So they can easily travel between floors and rooms in hotels or apartment complexes.

Some varieties of bedbugs prefer to feed on birds or bats, so they may take up residence in your attics or eaves. If their preferred prey migrates south, these bedbugs will settle for feeding on the humans in the house.

A female bedbug can lay more than 200 eggs in her lifetime, which typically lasts for about 10 months. Newly hatched bedbugs are nearly colorless, so they are hard to spot. They shed their skin five times as they grow, and need a blood meal for each molt.

Treatment for bites is typically supportive. Local antiseptic lotions or antibiotic creams can be applied for secondary infections, whereas corticosteroid creams and oral antihistamines can be used for allergic reactions. Bedbugs can be eliminated through the use of permethrin insecticides, baited traps, special bedbug-free beds, and bed nets. Homemade methods, such as wrapping duct tape around bed legs as shown, may be effective, but bedbugs have been known to climb other objects and then fall down onto a bed.