Role of Anaerobic Exercise in Overtraining

The development of optimal athletic performance is dependent on a carefully designed and executed training program.  One of the benefits of such a program is the avoidance of over training and associated decreases in performance. Although the athletic community has been aware of the problem of over training, scientists are only beginning to determine the physiological and psychological causes and consequences. In addition, different types of training most likely result in a variety of symptoms and results. This brief review will address overtraining and its relationship to anaerobic exercise.

Overtraining is a general term used to describe both the process of training excessively and the fatigue states that may develop as a consequence. The indiscriminate use of this term and related terminology has led to some confusion. Therefore, it is necessary to define the use of over training terms in this article. The following definitions are adapted from previous reviews on over training.

Overload training is the process of stressing an individual to provide a stimulus for adaptation and super compensation. This includes increasing training volume and/or intensity beyond what the athlete is accustomed to.

Training fatigue, or acute fatigue, is the normal response that is experienced following one or several days of heavy training associated with an overload stimulus.

Overtraining is the process of training at abnormally high levels of volume or intensity. According to some authorities, this term also includes performance decrements accompanying this stressful training process.

Overreaching  is a form of over training that follows short-term intensive training. This is sometimes a planned phase of a periodized training program. The symptoms of overreaching can be reversed by a longer than normal regeneration period: Overtraining syndrome or staleness refers to the final stage in a proposed continuum of increasingly severe chronic fatigue states that develop as a result of over training. This syndrome includes the many symptoms associated with over training, including decreased performance.  Muscular overstrain is acute tissue damage induced by a single intensive training session that exceeds the muscular stress tolerance.  This generally occurs after single or repeated bouts of excessive exercise that result in damage to muscle fibers. Muscular overstrain does not always accompany overreaching or overtraining.  There appears to be a continuum of events in the development of performance decrements due to over training. This proposed sequence is shown in Figure 1.

Overtraining is characterized by many physiological and psychological symptoms as well as decreased athletic performance. Table 1 includes a partial list of these symptoms and characteristics. It is obvious from the number of symptoms that over training is a very complex problem, including both training-related and non-training related  factors (e.g., social life,work or study stress).

The major objective of training is to cause biologic adaptations in order to improve performance of a specific task. This requires adherence  to a carefully planned and executed training program.  Attention is focused on factors such as training frequency and length of workouts, type of training, speed, intensity, duration, repetition of the activity and appropriate competition. Specifically for strength training, acute program variables include choice of exercise, order of exercise, number of sets, rest periods (between sets and between training sessions) and load (e.g., 1 RM or 10 RM). Although these factors vary depending on the performance goal, it is possible to identify several principles.

To improve performance and to bring about a training change, an exercise overload must be applied (overload principle). The appropriate overload for each person can be achieved by manipulating combinations of training frequency, intensity and duration. Applied to training, specificity refers to adaptations in the metabolic and physiologic systems that are dependent on the specific overload imposed (specificity principle). For example, strength-power training induces strength-power adaptations. Training benefits are optimized when programs are planned to meet the individual needs and capacities of the participants (individual differences principle). The beneficial effects of training are transient and reversible (reversibility principle). 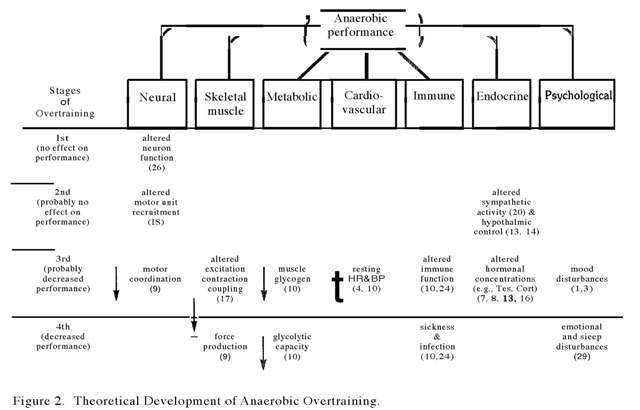 The capacity to Perform and persist in maximal exercise for a brief period of time, up to 60 seconds, is largely dependent on ATP generated by the immediate short term anaerobic energy systems.  Anaerobic sports such as football, weightlifting and sprinting, rely almost exclusively on energy derived from the muscle phosphate pool. Developing the capacity of the ATP-PC energy  system to the fullest is of paramount importance.  The phosphate pool can be overloaded by engaging specific muscles in repeated maximum bursts of effort for up to five to 10 seconds. Because high energy phosphates supply energy for intense, intermittent exercise, only  small amounts of lactic acid are produced and recovery is rapid.  To improve capability for anaerobic energy release via the short term lactic acid energy system, the physiologic conditioning program must overload this aspect of energy metabolism. For example, with interval training, a longer work interval engages the aerobic systems, whereas shorter intervals place greater overload on the anaerobic energy systems.

The overtraining symptoms that an athlete develops are specific to the type of training. When anaerobic training is involved, athletes often develop sympathetic overtraining characteristics. This occurs primarily in young athletes in sports where strength, speed and coordination are important and where large quantities of intense anaerobic exercises~ are performed, which can contribute to the development of a sympathetic overtraining syndrome. The sympathetic over training syndrome shows an increased sympathetic activity in the resting state, which contributes to the following symptoms:  increased resting heart rate, decreased lean body mass, decreased appetite, disturbed sleep, decreased performance, decreased recovery after exercise, increased irritability and emotional lability, loss of training and competitive desire, increased resting blood pressure increased incidences of injuries and infections, and decreased maximal plasma lactate levels during exercise.

When large amounts of aerobic training are performed, the athlete seems to develop in a manner opposite to the sympathetic over training syndrome: the parasympathetic over training syndrome. This appears to occur more often among older athletes in sports like swimming, cycling and running.  This syndrome is more difficult to identify because the symptoms are less alarming and are somewhat similar' to the effects of training improvement. This means that it is often diagnosed after a considerable delay, which makes it more difficult for the athlete to fully recover.

Overtraining may occur when combined stresses from training, environment, job and personal life exceed an individual's capacity to adapt. Overtraining may also result from sudden increases in training loads and inappropriate training, compromising recovery and super compensation. Many athletes attempt to train too much, too soon. They have the desire to do more, exceeding their ability to adapt. The body has a protective physiological response to decrease performance, or "shutdown" when the capacity to adapt is exceeded.

It appears that the susceptibility to over training varies between individuals. Highly motivated athletes seem to be at higher risk than other athletes. Some experts claim that women may be at greater risk than men of overtraining because of their tendency to push themselves harder in training, although this is not accepted by others. The intensity of training seems to contribute more than training duration to overtraining (19), especially when there is too much intense anaerobic work for too long a period of time, with many competitive events and little recovery in between. It also appears that the quantity of training and the duration of training are more potent contributors to overtraining than the specific type of training performed.  Additionally, the overall health status of an athlete may influence the risk of over training. It has been indicated that infectious diseases also affect muscular function, and it is conceivable that the associated decreases in exercise tolerance may result from over training when training is resumed too quickly. 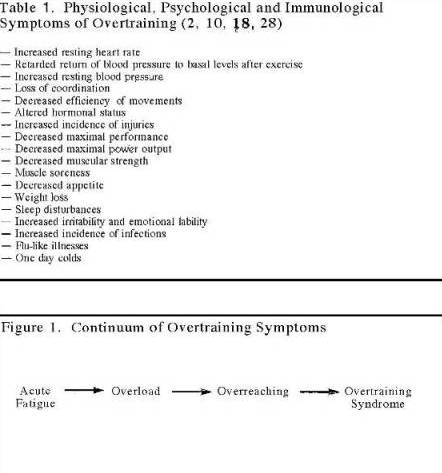 As can be seen, many physiological systems are dependent on each other for optimal function.  Dysfunction of one system (e;g., altered neuron function) can lead to a considerable cascade of physiological events. For example, some aspects of performance, such as strength, may be more sensitive to the acute effects of overtraining than others.

Previous research has attempted to identify physiological variables that can serve as markers for the onset of overtraining. This seemingly simple task, however, has many problems.  As seen in Figure 2, numerous physiological properties may be affected without actually  altering physical performance.  Additionally, various individuals and activities may demonstrate differential sequences of adaptation. As a result, what appears to be a marker in one situation may not occur in another situation. Possible examples of this might be the shot putter who is particularly affected by. decreased motor coordination, and the 400-meter sprinter who may be most affected by decreased muscle glycogen levels. To compound matters further, some individuals may experience decreased performances at a later stage than others. Therefore, attempting to identify contributing factors to overtraining is a difficult task, and it is difficult to determine which of the measurable contributing factors actually precedes overtraining.

Research devoted to anaerobic overtraining has primarily  investigated  increased training volumes. The role of increased training intensity on the development of anaerobic over training has received little attention (9). The common factor for each of these studies has been the difficulty of inducing performance decrements on a variety of easily administered field tests and laboratory evaluations.  Recent work has focused on the role of hormonal function and status with overtraining. It appears that the endocrine system is altered by anaerobic overtraining (7, 8), and may provide one mechanism of long-term adaptation. It appears, however, that there is no simple explanation for the cause of anaerobic over training.

It is important for coaches to prevent athletes from doing too much too soon. It appears, however, that the susceptibility to overtraining varies between individuals, particularly among highly motivated athletes. The conscientious coach must be aware of the possible signs of over training (Table 1).  Although these symptoms may not be present in each case of over training, they may be the most effective means available for identifying its onset. It must be remembered that most of these markers of over training were identified in aerobic training studies and may not be appropriate for identifying over training during anaerobic training.
Perhaps the most effective strength coaching tool for preventing over training is careful planning and monitoring all training sessions.  This involves the use of a long-term periodized training program designed to optimize training progress, and minimize the risk of over training, If over training has occurred, training volume and intensity must be decreased immediately to allow restoration of the physiological and psychological systems.  If overtraining is detected in time, restoration time may be minimized.  However, the temptation to "work through" the problem may result in more serious long term performance decrements.

In conclusion, the diagnosis of over training is primarily based on medical. history, and a variety of physical arid psychological symptoms.  Thus far, various laboratory tests have been inconclusive in detecting specific or remarkable changes associated with over training. As a result, coaches must carefully monitor the health and training progress of each athlete.