Tales from the past: Meeting the Four Tops. 1998

It's Monday night, and I've had a very tiring past few days. It's back to the ways of the old days, when hot water didn't exist, and cold water ran infrequently. It happens because they don't bother heating water unless there is a large group of people here. There isn't a large group of people here, actually, it is only me here. There is no one else in the entire "hotel". And from what I can see, I am the only foreigner left in the village. People don't come to train here in the winter as it gets too cold. I did happen to meet a guy from New Jersey on Saturday afternoon, a budding photojournalist, who was in some other part of China taking pictures of the Chinese cave dwellers, but happened to find himself "evicted" from the province when he was caught taking pictures of police beating the hell out of some poor civilian. We were supposed to get together for dinner that night. I haven't seen him since.

I had thought that I was going to have the honor of meeting some of the Temple's greatest, the Four Tops (the only four remaining monks at the Temple that survived the Cultural Revolution in the 70's) on Sunday, but since that didn't happen, I spent the day on the Chinese Stairmaster again. Seven hours, including frequent rest stops, up and down and up and down, for what seemed an eternity. The weather was a bit better than the last time, which definitely changed the appearance of the place. It is really, incredibly beautiful. I considered it one of my last opportunities for final conditioning before risking the altitude in Tibet, which occurs in a few days.

I was trying to finish this when the phone rang. It was Wang lun ( I call her white cloud, that's what it means, and I keep on forgetting wang lun, and one of her friends). I got hijacked to the karaoke bar down the hall, that dreaded place that has the usual one drunk Chinese guy singing every damn night until around 1100PM. I have long learned that it is a real slap in the face if you turn down an invitation of any sorts in this country. The Chinese just don't understand "no". They don't even understand "fuck off". I still don't get it, so instead of hurting their feelings, I went and had a bottle of water, and listened to terribly loud music. Now Chinese karaoke is an interesting phenomena. Let me explain. As you probably know, there is some degree of infanticide here in this country, and it predominantly involves the killing or abandoning of baby daughters. True, Chinese families can only have one child, and in the rural areas, two sometimes are allowed. If you live in a city and want two, you can pay a lot of money, something like six thousand dollars, and you can have a second. Now traditionally, as the parents get older, they tend to not end up in a nursing home as we do in the US, they end up in the son's house. Sons also are useful as they can tend the fields, build houses, do useful things. Daughters, on the other hand, are fairly useless to a family, as after they are married and gone, those parents have nowhere to go when they get older. Daughters are not as strong as sons, and therefore are not as desirable to tend the fields. Therefore, when one looks at the entire country, there is a relative dearth of females. Men looking to marry have a difficult time finding a wife sometimes, because the ratio of men to women is off a bit. Now that you are expert with Chinese demographics, a look at Chinese karaoke.

If you think a screaming Chinese baby is obnoxious, try one when he gets older and a bit more drunker. And then make the terrible mistake of giving him a microphone. Chinese karaoke is all basically the same formula. Boy longs for a girl, boy dreams of girl, boy meets girl, girl (who on these videos is usually very beautiful; I wonder where they find them....) pretends to fall in love with boy, boy falls in love with girl, girl disappears. The Chinese movies are all the same shit too. No wonder they all want to learn gong fu and beat the shit out of each other.

After a long work out this morning, I finally received my invitation to meet the Four Tops. I was to be at the Shaolin Temple at 2 PM; I brought both cameras. But first, a little history. Back in the late 60's, during the Cultural Revolution, students and the such were pushed to rebellion against the intelligentsia and religious figures of society, kind of like Hitler's henchmen going after the Jews and professionals of that time. As opposed to Chairman Mao's previous successful societal movements in the 50's, known as the "Great Leap Forward", when he brought the country together, his Cultural Revolution, whereby he tried to make everyone equal by pushing the professional and technical people into farming positions, and tried to destroy representations of religious life, became to be known as the "Great Leap Backward". Well, the Shaolin Temple was no stranger to all of this nonsense, and in the late '60s, it too suffered from this mayhem. Of the hundred of so monks here at the time, all but thirteen left for good. Some hid in the mountains, some hid in some buildings in the back of the Temple, and most left the monkhood to return to their home towns, marry, and pretend to me non-monks, a much safer profession at the time. (That is where the category of "custom monk" came about, a monk (disciple) of the Shaolin Temple, but able to marry, and not live at the Temple). Some monks returned, in all, only 13 were left when the government decided that the Cultural Revolution was bad policy, after Mao's death in I think '76.

I met one of the four last year; he was one of my master She De Cheng's masters. I can't remember his name, but he was somewhere in his eighties, and didn't appear too healthy at the time9Shi Su Yuan). I hear that now he is in a hospital in Zengzhou. I met the other three today. Shi Su Xi, is around 75, with obvious Parkinson's disease. He was abbot of the Temple last year. Now, he is relegated to the nicest digs in the Temple, and only sees visitors "by invitation only" (as do any of them). Through a translator, we talked briefly about the Cultural revolution, gong fu, and the Temple. My next visit was with the current abbot, and I can't remember his name, though I have his card. He is a very busy man, and apparently today was no exception, as he was having some sort of pow wow with the leaders of the other Buddhist monasteries in the valley. We met briefly, took photos, and I was on my way. 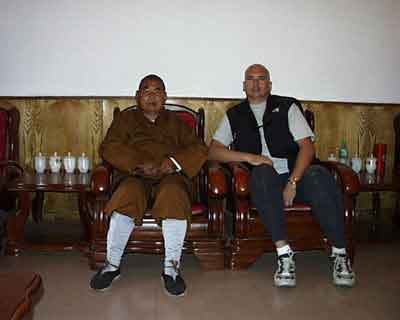 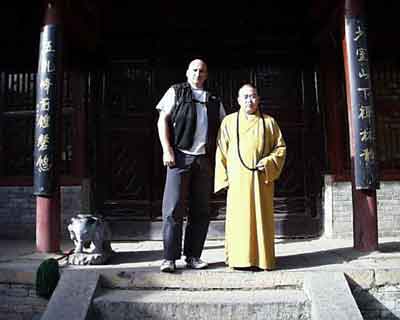 The last of the four, Shi Wan Heng, is eighty years old. He is one of my master's (She De Cheng) masters, and he is the one who taught most of the gong fu to the monks. He still practices gong fu every day, and from looking at the way he walks, I believe it. An extremely friendly man, he invited me into his "home", a single room, with a temple room next door. We talked for almost an hour via a translator. It was he who invited me to the so called "inner sanctum", the Buddhist prayer meeting held twice daily at one of the temples in the Shaolin Temple. 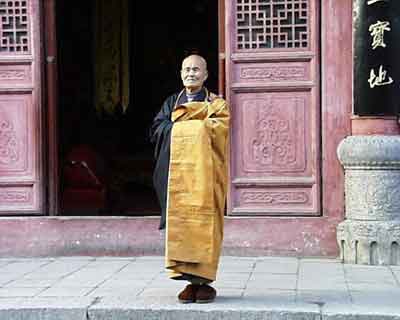 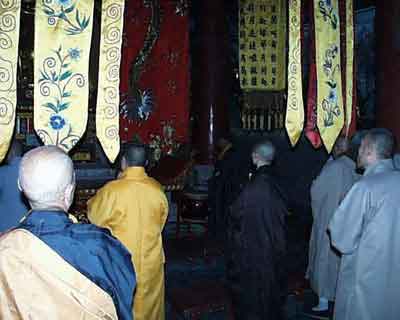 They hold these prayer services twice a day, once at 5AM, the other at 5PM. Thank god I wasn't invited to the early edition. The service took about twenty minutes, and was full of singing and chanting (far better than the shit I hear every night from the karaoke bar), drum beating and bell ringing. Very impressive. I even got pictures, some of which are in the Sanctum file. After services, the big master She Wan Heng, his disciple (another master She Su Gong), and I went to dinner at one of their favorite hole in the wall places. I have a picture of the kitchen, but I can't remember if I included it in the file. That kitchen was a story all in itself. They enjoyed their dinners, and I "enjoyed" my greasy fried rice. I longed for a fake chocolate protein drink. And yes, they ate meat. "I eat it when I can get it", Shi Wan Heng told me. "What are you going to make of it", is what he was probably thinking. So much for Americanized attitudes towards Shaolin Temple monks.

It was an interesting afternoon. I made a few friends, some of which want to come to the US for a visit. Just what I need, a few old masters wandering around the house. I can see the dogs now. We exchanged addresses, and I was off. I had promised fluffy cloud that I would visit her English class which she held at 7 PM every night for the students. 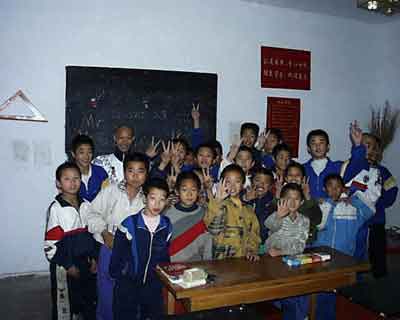 When I got there at 710, all of the kids got up and cheered. As if they've never seen an American before. I gave a nice short speech, which no one understood, using my best New York accent, and then sat in this little little chair next to this very little little boy. I sat through a very painful hour of class, as the only lights were these bare bulb fluorescent lights, which are basically anathema to me. But it was fun. Fluffy cloud would come back to me an ask me if she were pronouncing the English words correctly; not to embarrass her in front of her class, I always told her that her English was perfect. I also did not want to try to teach her the correct way of pronouncing "L's" and "R's". The class enjoyed having me there, and then wanted me to do some gong fu poses with them after class. Gong fu rules here, English and math (they only learn very basic mathematical skills, I surmised from looking through their "textbook", basically a pamphlet). After class, from 8 to 9PM, instead of going to their beds and resting, they were all out on the steps of the wushu guan, practicing gong fu in the moonlight, and kicking a large hanging sandbag. The bigger kids were smacking this thing with their feet, not causing it to move much as it was a heavy canvas bag full of a lot of dirt (heavier than most of the students), but making a lot of noise, as they hit it with power. Of course, they wouldn't let me go until they saw me kick it. I did, causing the bag to swing wildly, to everyone's amazement, especially mine. Big baldy killed the bag. Everyone cheered, and I had been accepted. I have many new friends, all of whom I can't remember their names, and couldn't pronounce them if I could. No matter, I can't tell them apart anyway.

Oh, and here is picture from the Pagoda forest. Those stone structures are burial grounds for the famous monks. There are 284 of them, dating in age from 1996, when the last one was built, to over 1500 years ago. I fear that number 285 is going to be built real soon....(see gallery below) 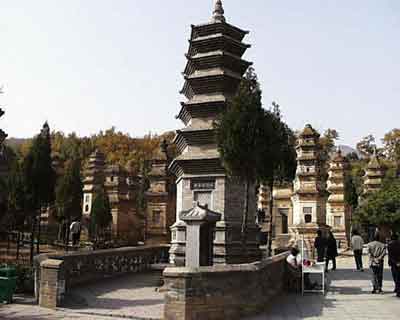 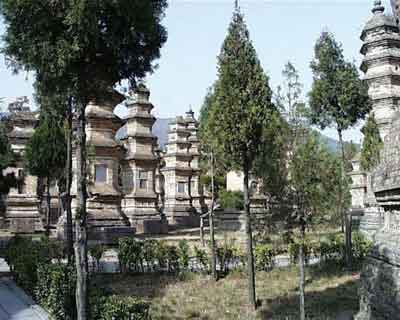