The school day starts at 0500, at which time all the students get up and run anywhere from a kilometer or two. After that, upon their return, they wash their hands and faces and eat breakfast at around 0700. Breakfast consists of a steamed bread like bun, and rice, usually in some sort of watery soup like mix. At 0830, gong fu training starts. The typical gong fu training starts out again with some running, usually up and down some stairs, and in the immediate area. That lasts for about ten minutes or so. They usually run in a team, lined up in pairs. After that there is a cool down period, where a game is played. It appears to me to be some sort of tag game, as they all stand in a large circle (each class has around twenty students), and two of them run after each other. It all appears friendly enough, as they chase each other in and around the circled students, but occasionally, it is not unlikely to find the somewhat unpleasant noogie being offered to the unfortunately caught recipient. It does become a bit unorderly in a fashion, kind of reminded me of recess in grammar school. Structure reappears when stretching begins. 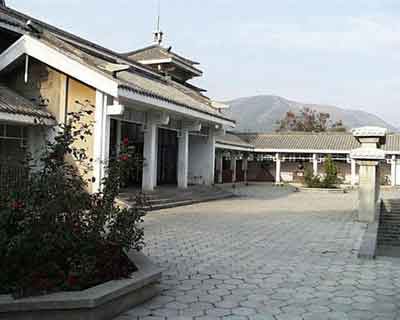 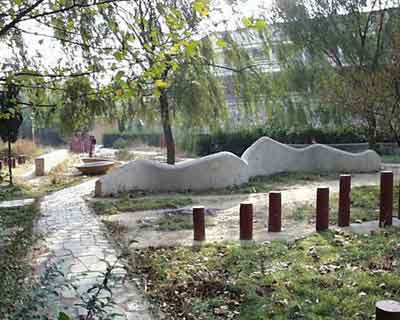 Stretching is done on their own, usually by putting their legs up against a wall, or doing splits with one leg on a stair, to over extend their split. They don’t generally do anything too extravagant when it comes to stretching. Some help others by pushing their legs up over their heads. It is not an organized procedure, each does what each feels is best for himself. Stretching then "continues" with kick practice.

They line up in two rows, walking behind one another, practicing the same thing, one after another. Usually the two rows move in unison, stepping forth and kicking as one. Initially, kicks are done softly, to warm up, first a high instep kick straight up over the head, next, a high instep kick across the body to the opposite shoulder. Then crescent and reverse crescent kicks are done. This whole procedure is repeated in a more formal way, with the arms extended horizontally, fingertips up. This is supposed to aid in balance improvement. Finally, a kick that extends to the side and up over the head is performed.

After this, basic gong fu maneuvers are done, usually the same ones every day. I assume that the instructor changes these as time goes by, but essentially, they do a good deal of the 18 of them. This whole process usually takes about an hour, at which time a ten minute rest period is prescribed. Somewhat after 1000, the students get back into their rows, but this time prepared with weapons. Form training is about to begin.

They might do a small segment of a form, such as part of Xiaohung Chuan, or they might do part of a weapons form. It appears that each student has a form or weapon of choice that he becomes perfect in. But there is evidence that cross training goes on. By 1100, class is over, and the students retreat to their rooms, for rest, and preparation for lunch.

Noon brings a typical meal of rice and vegetables, to which this day I can still not identify, and usually a small amount of pork. Meals are cooked on the premises. After lunch, a rest period occurs (called sushi ya), and class then reconvenes at either 1430 or 1500.

The students are basically split at this point, based upon age. The students range in age from 10 to their early 20’s. I should probably digress here. Most children in China go to basic school, starting at age 7. They learn basically what we learn in America, with the exception that the history and language is that of China. It is safe to say that a majority of them continue on through basic school, learning music, history, literature, Chinese and mathematics, to the end of basic schooling, which occurs at age 18. A small percentage, maybe about 10%, then are successful enough to gain entrance to college, which lasts 3 years, and costs around 3000 Yuan an year. Interestingly enough, the main course of study in college is English. Graduation occurs at age 22, and the graduate then enters the workforce somewhere. Not all Chinese finish basic school, some leave and enter the trades, or work the fields.

A few desire to learn gong fu, with the ultimate goal of becoming a policeman, bodyguard (used to be popular to be a bodyguard in Hong Kong, now that the Chinese own it again, and one would assume, "crime" is better taken care of, I don’t know what the needs are for this now), gong fu teacher, or, those with really high hopes, TV or movie star. Some want to be able to perform gong fu, seeing this as a ticket to another country eventually. A few of these students in the Shaolin School opt to become monks. The best that become monks end up doing the gong fu performances.

So, when a child the age of 10 or 12 leaves basic school to learn gong fu, he goes on the above path, leaving behind training in history, geography, and all the other usual scholastic stuff that we all learned and loved. Instead, his mornings are used for gong fu. However, his afternoons are oriented towards scholastics. Class starts at 1430, for three hours, with ten-minute breaks each hour. Three subjects are taught, Chinese, English, and mathematics. Class for these children ends at 1730, at which time they prepare for dinner, which occurs at 1800. Dinner by the way, is the usual rice, mystery vegetables, pork, steamed buns and noodles. After dinner, the student’s time is their own; some practice gong fu, others walk through the village and visit friends. All are in bed by 2130 after a quick warm shower and clean up.

The older students, who are presumably better versed in Chinese than the others, have gong fu practice which starts at around 1500. The class is the same as the morning one. It ends at 1700, after which preparation for dinner occurs. Some of these students then go to a 1900 one hour class in English, others practice gong fu, others just cruise around visiting people or rest. All take warm water showers at night, and are in bed by 2130.

The usual fee for Shaolin gong fu training is 3000 Yuan a year, it includes lodging (if you can call this lodging), food (if you can call this food), training, classes, and school clothing, usually something that says Nike or Adidas on it, with a poorly applied white lettering on the back, which identifies the school. Clothing has changed in quality over the last four years; while years ago one saw more of the traditional garments on the children, now, more children wear better quality sweat suits. The usual old style Keds sneaker (the Chinese variety) is being replaced now with a more modern looking running shoe. It is obvious in all aspects of Chinese life that western wear and attitudes are starting to pervade. Remember, the Shaolin school is considered a "public" school, as the Temple and the wushu quan are "owned by everybody", i.e., the government. 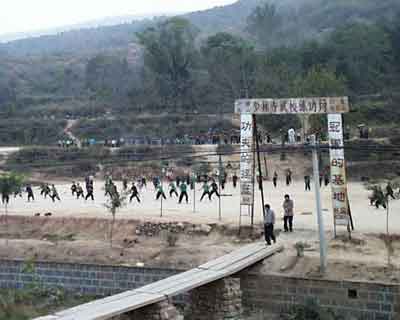 Surrounding the Temple are dozens of private schools, some of which are taught by previous monks, some taught by lay man well versed in gong fu, some not so well versed in gong fu. I guess that if you have the money to build a school, and you can get people to come train with you, you can open a school. From what I can tell, most of the gong fu taught in the private schools is very similar, if not the same, as the gong fu taught in the Shaolin Wushu Guan. Of course one would expect individualization, from one instructor to the next, as he alters what he teaches to suit his own needs (as I seem to find in the US all the time), but this is not the norm. Xiao Hong Chuan at one place is Xiao Hong chuan at another. All of the 18 basic weapons are taught, but predominantly, the Chinese broadsword, the bow staff, chain whip, and spear are the most common. Of course, the 18th weapon, the hands, are taught everywhere. At the Shaolin Wushu Guan, all the remaining weapons are taught, a process which basically passes on the information and the legend to newer generations.

There are about 180 different gong fu forms, comprising the 18 weapons, and more animal types than you can imagine. The forms not only include the usual lions and tigers and bears ("Oh my!"), but also include praying mantis, snake, eagle, monkey, drunken man, crane, frog (yes, the frog; that is one that you should see before you die), and many others, more than I ever encountered in my karate practice in the US. My master, She DeCheng, knows around 80 of these. And when I say know, I mean, be able to perform perfectly (I know five, and when I say know, I mean make abortions of). Other masters know some similar, and other different ones. It is in this way, by passing on the knowledge of these forms to multiples of people, that the tradition is passed on and kept.

Other points of interest…. The emperor, being the highest of all, was the only one who could use the number nine in many ways (the doorways at the Forbidden City Imperial Palace are cut in a fashion that their dimensions are in multiples of nine). The emperor got the highest number. Nine is the highest because the Chinese count from 0 to 9, as opposed to us, who count from 1 to 10. The monks I assume then got the next highest number, 8. This is probably the reason why gong fu has so many groups of forms in it that are in multiples of 8, or has the number 8 in it. Baduajuin qi gong has 8 steps, Lohan Drangoon qi gong has 32 (though for some reason I know 33 steps), and many of the forms have either around 64 or 108 steps, depending upon how you count the steps. There are 18 basic gong fu maneuvers, which are the derivatives of the 18 hands of Lohan, the original training exercises given down over the ages.