But that's another story....

Towards the end of the Shaolin experience, Yong and I started frequenting DengFeng, which is  a larger city about ten kilometers from Shaolin. Yong's school is there, as well as something far more important. Video stores. The Chinese absolutely crave their video CD's, and Yong was no exception. When he stays at his school, he, as the oldest of the fifty or so students, is responsible for going into DengFeng to rent some VCD's on Wednesday and Saturday nights.  Those are the two nights that the school  kids are allowed to watch movies. Regular movie theaters are a rarity here. I found one in Beijing, and supposedly, the DengFeng town center has an auditorium where they occasionally show films. But since real films from America are expensive to get, the DengFengians, along with the Shaolin village people, drag out a television and a VCD player, and sit on the street to watch a pirated movie. It is not uncommon to see fifty or a hundred people, sitting on a sidewalk, in a very orderly and quiet fashion, to watch a small 19 inch television propped up on chairs. I found the whole concept so fascinating, that we went to a video store to buy a whole bunch. Yong wanted to stay up every night to either play Unreal on his laptop, or watch movies. 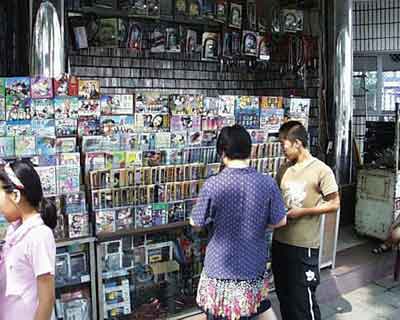 Yong searches through the American movie section. All twenty movies.

I ended up buying Titanic for twelve Yuan (or about $1.25) and a couple of war movies. The topics that the movie selections concentrated on were a bit interesting. Love stories and war stories. Videos of all sorts of American weaponry. Videos of American nuclear weapons. And the Chinese videos, made in China itself, mostly consisted of love stories and gong fu. Jackie Chan and Jet Li are king here. So are  Stallone and Schwarzenegger. Anything with a lot of action, or love, rules here.  Couldn't find Star Wars the first episode yet. I'm sure somebody is "making it" here.

So one night I watched part of Titanic. It really wasn't all that bad. The guy that filmed it held the video camera fairly level, and the people in the audience thankfully did not get up and block the film. I found the whole idea of watching all those little heads under the screen quite funny, and ended up spending more time watching those heads move than watching the movie. The film quality was a bit fuzzy, and is was slightly obscured by the big Chinese characters that they spread across the bottom of the film image. I couldn't understand why they didn't put the subtitles over the little heads on the bottom of the image. If there were a lot of Chinese subtitles to put in a scene, they just kept moving the subtitles up until it covered the film. Fortunately, they never covered the little heads on the bottom, so I could watch the people watching the film without any trouble. Yong ended up getting many of these, and every night, as I passed out from the effects of my nightly medication and my daily workouts, Yong stayed awake, eyes glued to some war movie or love story. I would wake up in the morning, and there would be Yong, on his bed, computer open with battery dead, sound asleep. Most probably, he had been up a good deal of the night.

What I really find annoying about the VCD's is not the Chinese subtitles which cover up half the screen, but the very frequent use of dubbing. Not only will they put subtitles on the flicks, but more often than not, they will dub over the actors voice with some Chinese speaking voice. It really gets good when they put either Thai or Japanese subtitles on top of the Chinese subtitles, and dub over the voices. It gets so bad that you wish those little heads at the bottom of the screen would move more often. Titanic, with Chinese dubbing, was absolutely hysterical.